The miracles of modern technology

Music has the power to heal. Friends are a blessing. And when you put them together, it can be magical.

On Friday night I went to the heart of downtown Cincinnati, Fountain Square (as seen in the “WKRP in Cincinnati” opening credits) for a free indie rock show. Wussy — proclaimed by Robert Christgau as “the best band in America” — was the headliner, and they lived up to that billing, albeit a bit raggedly. Prior to Wussy, another excellent band called Pike 27 played. Their usual drummer is my friend Dave, who is currently being treated for his second bout with lymphoma. I worked with Dave’s wife Jacqui at an ad agency long ago, and I’ve shared a few of Jacqui’s poignant posts about their journey on her “Nashville or Bust” blog.

Yesterday morning I went on a 9-mile run with my wife, who is training for the New York Marathon, and we saw Jacqui running the other way with another running group. I’m guessing her runs are a bit more meditative and therapeutic than mine.

Last night we went to a fundraiser for Music Resource Center and I met Pike 27’s frontman (also named Dave) and his wife Amy. Dave is friends with my friend Jennifer from my radio days. And Amy is good friends with one of my current co-workers. Amy also had played a key role in Friday night’s concert – iPhone cameraperson. Turns out they were able to broadcast (narrowcast actually) the gig to Jacqui and Dave at their home. 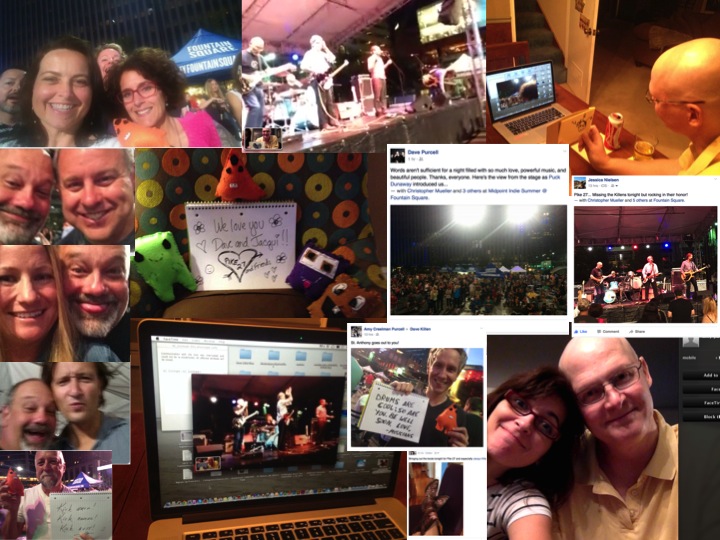 Take a minute and let this picture sink in.

This was our Friday night. And it was pretty spectacular.

And last night — the night of the very much anticipated show on Fountain Square as part of Cincinnati’s MidPoin Indie Summer series — they made sure that Dave didn’t miss out.

It was a last minute idea and probably the most hillbilly way to ‘live cam’ — but we did it! Thanks to iPhones, FaceTime, iCloud and Facebook, we patched in from the dining room table.

Dave had no clue that we were doing this. In fact, he was a bit annoyed when he heard me fussing at my computer and told him to, “get over here — you have to see this!” I think he thought I was watching cat videos or something.

I really wished I had a video camera rolling on him when he saw Amy on my computer screen, waving and smiling, and figured out that she was on Fountain Square. Live. Like there at the show.

The plan was really to watch one or two songs. We didn’t want to burden Amy (who was fighting bronchitis) to wear out her arm holding her phone up all night. But others jumped in and kept the feed going. Then there were the message pictures and the selfies and wow… so much love.

We are humbled by and grateful to all the folks that are Pike 27 and for the local music scene who continue to send love and support. It was incredible to see Dave so happy — so alive! And yes, he was singing his ‘girl part’ high harmonies and keeping time with his feet. Would you expect any less? ~Jacqui

My son’s band played a few songs at the fundraiser last night. If they keep playing music, I hope they always remember that it’s not about fame, fortune or glory, it’s about the friendships you form and the love you share.