Buffalo Tom is a favorite band of mine. They still perform occasionally, but these days lead singer Bill Janovitz spends more time working as a realtor near Boston. Bill’s “Part Time Man of Rock” blog had a very poignant blog post about Sandy Hook back in 2012. Sadly, in the aftermath of Umpqua Community College (and dozens of others that have happened since Sandy Hook) it’s still just as relevant today. 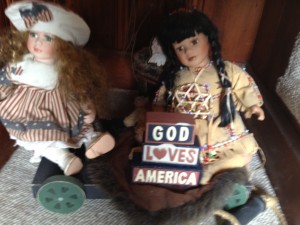 I am 46. Despite most evidence to the contrary, a prolonged adolescence in a rock band, and an overall weakness to let go of my youth (I prefer to think of it as being young at heart), I have to finally admit I am a grown-up. We, the grown-ups must accept responsibility for the state of world that our children will be inheriting.

We often hear such a philosophy, rightfully so, in the context of climate change and economic issues. But when I hear about school shootings like this tragedy in Connecticut, I feel complicit in a failure that we all share in protecting these children — a failure of public policy on gun control and national efforts to deal with mental health issues had led to this and other tragedies. To simply blame it on the “lone gunman,” the N.R.A., or in the twisted logic of those who feel teachers and administrators should be armed, is to shirk our responsibility. To dismiss abhorrent events like these as the anomalous product of “evil” minds is a simplistic cop-out. Evil is easy to understand, as G.W. Bush and his speechwriters knew well. But reality is far more complicated. Good vs. evil is for fairytales and comic books.

Grown-ups should know that. For if we are not willing to deal with the difficult and costly issues of caring for our mentally and physically ill, and if we are not tough enough to confront extremist voices and powerful lobbies like the N.R.A., then we do not deserve the democracy and freedoms that were delineated by our nation’s founders and which subsequent others have sacrificed their lives to defend, from the Revolutionary War forward. The framers of the Constitution did not envision individual citizens arming themselves to the hilt with efficient mass-killing machines. As millions of others have pointed out, the Second Amendment explicitly states “A well-regulated militia” and the height of arms technology at the time was a musket. We all know that. Wayne LaPierre knows that. Cowering professional politicians with no backbone to stand up to the gun lobby know that. The reddest redneck, camo-clad Ted Nugent worshipper knows that. Even the feeblest-minded Fox News hosts and guests know that.

We may not be expected to stop every insane bomb-making McVeigh-like terrorist, nor will we stop every future mass shooting. But no one can deny that we need to start to take logical steps to regulating guns to make it more difficult for the most damaged among us to gain access to machines that slaughter the most innocent among us. Just look at the experience of Australia, if you need more proof to support what should be basic logic. And we should be expected to work to help the most alienated and mentally ill among us. Regulation does not equal a surrender of such liberties. Ownership of semi-automatic weapons should not be less regulated than owning a car.

Each day that goes by without substantive corrective measures should bring each and all of us collective shame. As long as we are unwilling to take advantage our self-evident truths of individual liberty, enshrined in our nation’s most sacred documents, to speak out loudly and demand action, days like Friday should make us all feel ashamed to be Americans — ashamed to have done so little with the responsibility that comes with such advantages.

This shared culpability is what I believe President Obama was feeling when he stood at the podium on Friday wiping away tears. Not only sadness as a father, but responsibility as a leader and, even more basically, as a grown-up. We have already failed these 20 first-grade children, as we have dozens, if not hundreds of others. What are we going to do to stop the next obscenity?

As John Oliver pointed out, mass killings seem to be the only time we talk about mental health

And this New Yorker article shows that poor mental health is not the real culprit:

When Swanson first analyzed the ostensible connection between violence and mental illness, looking at more than ten thousand individuals (both mentally ill and healthy) during the course of one year, he found that serious mental illness alone was a risk factor for violence—from minor incidents, like shoving, to armed assault—in only four per cent of cases. That is, if you took all of the incidents of violence reported among the people in the survey, mental illness alone could explain only four per cent of the incidents. When Swanson broke the samples down by demographics, he found that the occurrence of violence was more closely associated with whether someone was male, poor, and abusing either alcohol or drugs—and that those three factors alone could predict violent behavior with or without any sign of mental illness. If someone fit all three of those categories, the likelihood of them committing a violent act was high, even if they weren’t also mentally ill. If someone fit none, then mental illness was highly unlikely to be predictive of violence. “That study debunked two myths,” Swanson said. “One: people with mental illness are all dangerous. Well, the vast majority are not. And the other myth: that there’s no connection at all. There is one. It’s quite small, but it’s not completely nonexistent.”

In 2002, Swanson repeated his study over the course of the year, tracking eight hundred people in four states who were being treated for either psychosis or a major mood disorder (the most severe forms of mental illness). The number who committed a violent act that year, he found, was thirteen per cent. But the likelihood was dependent on whether they were unemployed, poor, living in disadvantaged communities, using drugs or alcohol, and had suffered from “violent victimization” during a part of their lives. The association was a cumulative one: take away all of these factors and the risk fell to two per cent, which is the same risk as found in the general population. Add one, and the risk remained low. Add two, and the risk doubled, at the least. Add three, and the risk of violence rose to thirty per cent.

I’m not anti-gun, but there’s a world of difference between a rifle designed for hunting animals and handguns or rifles designed to kill humans. I agree with Bill Janovitz when he says “Regulation does not equal a surrender of such liberties. Ownership of semi-automatic weapons should not be less regulated than owning a car.” As this article shows, more guns = more homicide:

The truth is that there is something America can do about gun violence. The empirical research shows that reducing the number of guns — by reducing access to them, or by immediately cutting the supply of them through, for example, buyback programs — would lead to fewer gun deaths. “Within the United States, a wide array of empirical evidence indicates that more guns in a community leads to more homicide,” David Hemenway, director of the Harvard School of Public Health’s Injury Control Center, wrote in Private Guns, Public Health.

The Oregon killer had easy access to guns, and lots of them, according to this New York Times article:

In an online forum, answering a question about state gun laws several years ago, Ms. Harper (killer’s mother, with whom he lived) took a jab at “lame states” that impose limits on keeping loaded firearms in the home, and noted that she had AR-15 and AK-47 semiautomatic rifles, along with a Glock handgun. She also indicated that her son, who lived with her, was well versed in guns, citing him as her source of information on gun laws, saying he “has much knowledge in this field.”

“I keep two full mags in my Glock case. And the ARs & AKs all have loaded mags,” Ms. Harper wrote. “No one will be ‘dropping’ by my house uninvited without acknowledgement.”

Law enforcement officials have said they recovered 14 firearms and spare ammunition magazines that were purchased legally either by Mr. Harper-Mercer, 26, or an unnamed relative. Mr. Harper-Mercer had six guns with him when he entered a classroom building on Thursday and started firing on a writing class in which he was enrolled; the rest were found in the second-floor apartment he shared with his mother.

It’s not just the mass killings, it’s the daily violence that happens in every city in America, with teenagers killing other teenagers. This article is one of the most comprehensive I’ve found on the topic. Well worth a read.